Published in The Morning Chronicle on 15 December 1834.

The British Newspaper Archive. Some rights reserved. This work permits non-commercial use, distribution, and reproduction in any medium, provided the original author and source are credited.

When we affirm that brokers’ shops are strange places, and that if an authentic history of their contents could be procured, it would furnish many a page of amusement, and many a melancholy tale, it is necessary to explain the class of shops to which we allude. Perhaps when we make use of the term "brokers’ shops," the minds of our readers will at once picture large, handsome warehouses, exhibiting a long perspective of French-polished dining-tables, rosewood chiffoniers, and mahogany wash-hand stands, with an occasional vista of a four-post bedstead and hangings, and an appropriate fore-ground of dining-room chairs. Perhaps they will imagine that we mean an humble class of second-hand furniture repositories. Their imagination will then naturally lead them to that street at the back of Long-acre, which is composed almost entirely of brokers’ shops, where you walk through groves of deceitful, showy-looking furniture, and where the prospect is occasionally enlivened by a bright red, blue, and yellow hearth-rug, embellished with the pleasing device of a mail-coach at full speed, or a strange animal, supposed to have been originally intended for a dog, with a mass of worsted-work in his mouth, which conjecture has likened to a basket of flowers. This, by-the-bye, is a tempting article to young wives in the humbler ranks of life, who have a first-floor front to furnish; they are lost in admiration, and hardly know which to admire most. The dog is very beautiful, but they have a dog already on the best tea-tray, and two more on the mantel piece. Then there is something so genteel about that mail-coach; and the passengers outside (who are all hat) give it such an air of reality! There are some of the most beautiful looking Pembroke tables that ever were beheld: the wood as green as the trees in the Park, and the leaves almost as certain to fall off in the course of a year. There is also a most extensive assortment of tent and turn-up bedsteads, made of stained wood; and innumerable specimens of that base Imposition on society—a sofa bedstead. A turn-up bedstead is a blunt, honest piece of furniture; it may be slightly disguised with a sham drawer, and sometimes a mad attempt is even made to pass it off for a book-case; ornament it as you will, however, the turn-up bedstead seems to defy disguise, and to insist on having it distinctly understood that he is a turn-up bedstead, and nothing else; that he is indispensably necessary; and that, being so useful, he disdains to be ornamental. How different is the demeanour of a sofa-bedstead! Ashamed of its real use, it strives to appear an article of luxury and gentility, an attempt in which it miserably fails. It has neither the respectability of a sofa, nor the virtues of a bed; every man who keeps a sofa-bedstead in his house, becomes a party to a wilful and designing fraud—we question whether you could insult him more than by insinuating that you entertain the least suspicion of its real use.

To return from this digression, we beg to say, that neither of these classes of brokers’ shops forms the subject of our fifth sketch. The shops to which we advert, are immeasurably inferior to those on whose outward appearance we have slightly touched. Our readers must often have observed in some bye-street in a poor neighbourhood, a small, dirty shop, exposing for sale the most extraordinary and confused jumble of old, worn-out, wretched articles, that can well be imagined. Our wonder at their ever having been bought, is only to be equalled by our astonishment at the idea of their ever being sold again. On a board, at the side of the door, are placed about twenty books—all odd volumes, and as many wine-glasses—all different patterns; several locks, an old earthen-ware pan, full of rusty keys; two or three gaudy chimney-ornaments—cracked, of course; the remains of a lustre, without any drops, a round frame like a capital O, which has once held a mirror; a flute, complete, with the exception of the middle joint; a pair of curling-irons, and a tinder-box. In front of the shop-window, are ranged some half-dozen high-backed chairs, with spinal complaints and wasted legs; a corner cupboard; two or three very dark mahogany tables, with flaps like mathematical problems; some pickle jars, some surgeons’ ditto, with gilt labels, and without stoppers; an unframed portrait of some lady who flourished about the beginning of the thirteenth century, by an artist who never flourished at all; an incalculable host of miscellanies of every description; including bottles and cabinets, rags and bones, fenders and street-door knockers, fire irons, wearing apparel and bedding, a hall-lamp, and a room-door. Imagine, in addition to this incongruous mass, a black doll in a white frock with two faces, one looking up the street, and the other looking down, swinging over the door; a board with the squeezed-up inscription "Dealer in Marine Stores," in lanky white letters, whose height is strangely out of proportion to their width; and you have before you precisely the kind of shop to which we wish to direct your attention.

Although the same heterogeneous mixture of things  which we have attempted to describe, will be found at all these places, it is curious to observe how truly and accurately some of the minor articles which are exposed for sale—articles of wearing apparel, for instance—mark the character of the neighbourhood. Take Drury-Lane and Covent-garden for example. This is essentially a theatrical neighbourhood. There is not a pot-boy in the vicinity who is not, to a greater or less extent, a dramatic character. The errand-boys and chandler’s-shop-keepers’ sons, are all stage-struck; they "get up" plays in back kitchens hired for the purpose, and will stand before a shop window for hours, contemplating a great staring portrait of Mr. Somebody or other, of the Royal Coburg Theatre, "as he appeared in the character of Tongo the Denouncer." The consequence is, that there is not a marine-store shop in the neighbourhood which does not exhibit for sale some faded articles of dramatic finery, such as three or four pairs of soiled buff boots with turn-over red tops, heretofore worn by a "fourth robber" or "fifth mob;" a pair of rusty broad swords, a few gauntlets, and certain resplendent ornaments, which, if they were yellow instead of white, might be taken for insurance plates of the Sun Fire-office. There are several of these shops in the narrow streets and dirty courts, of which there are so many near our national Theatres, and they all have tempting goods of this description; with the addition, perhaps, of a lady’s pink dress, covered with spangles, white wreaths, stage shoes, and a tiara like a tin lamp-reflector. They have been purchased of some wretched supernumeraries, or sixth-rate actors, and are now offered for the benefit of the rising generation, who, on condition of making certain weekly payments, amounting in the whole to about ten times their value, may avail themselves of such desirable bargains.

Let us take a very different quarter, and apply it to the test. Look at a marine store-dealer’s in that reservoir of dirt, drunkenness, and drabs, thieves, oysters, baked potatoes, and pickled salmon—Ratcliff-highway. Here, the wearing-apparel is all nautical: rough blue jackets, with mother-of-pearl buttons, oilskin hats, coarse checked shirts, and large canvass trousers, that look as if they were made for a pair of bodies instead of a pair of legs, are the staple commodities. Then there are large bunches of cotton pocket-handkerchiefs, in colour and pattern unlike any one ever saw before, with the exception of those on the backs of the three young ladies without bonnets who passed just now. The furniture is much the same as elsewhere, with the addition of one or two models of ships, and some old prints of naval engagements, in still older frames. In the window are a few compasses, and a small tray containing silver watches, in clumsy thick cases, and tobacco-boxes, the lid of each ornamented with a ship or an anchor, or some such trophy. A sailor generally pawns or sells all he has before he has been long ashore; and if he does not, some favoured companion kindly saves him the trouble. In either case it is an even chance that he afterwards unconsciously re-purchases the same things at a higher price than he gave for them at first.

Again; pay a visit with a similar object, to a part of London, as unlike both of these as they are to each other. Cross over to the Surrey side, and look at such shops of this description as are to be found near the King’s Bench Prison, and in "The Rules." How different, and how strikingly illustrative of the decay of some of the unfortunate residents in this part of the metropolis! Imprisonment and neglect have done their work: there is contamination in the profligate denizens of a debtor’s prison; old friends have fallen off; the recollection of former prosperity has passed away, and with it all thought of the past, all care for the future. First, watches and rings, then cloaks, coats, and all the more expensive articles of dress, have found their way to the pawnbroker’s. That miserable resource has failed at last, and the sale of some trifling article at one of these shops, has been the only mode left of raising a shilling or two, to meet the urgent demands of the moment. Dressing-cases, and writing-desks, too old to pawn, but too good to keep, guns, fishing-rods, musical instruments, in the same condition, have been first sold, and the sacrifice has been but slightly felt. But hunger must be allayed, and what has already become a habit is easily resorted to when an emergency arises. Light articles of clothing, first of the ruined man, then of his wife, at last of their children, even of the youngest, have been parted with piece-meal. There they are, thrown carelessly together, until a purchaser presents himself; old and patched, and repaired, it is true, but the make and materials tell of better days; and the older they are, the greater the misery and destitution of those whom they once adorned.

We had intended to sketch this subject less in outline than is customary with us. We are, however, unwilling to exceed our ordinary limits, or to trespass at greater length than usual on the patience of our readers. We have more of these imperfect sketches to submit for their perusal; and as we hope to have many opportunies—when the partial absence of matter of pressing and absorbing interest again enables us to occupy a column occasionally—of laying our pen-and-ink drawings before them, we postpone the further consideration of this subject until a future time. 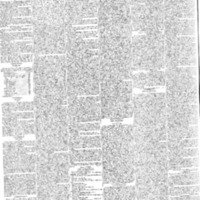